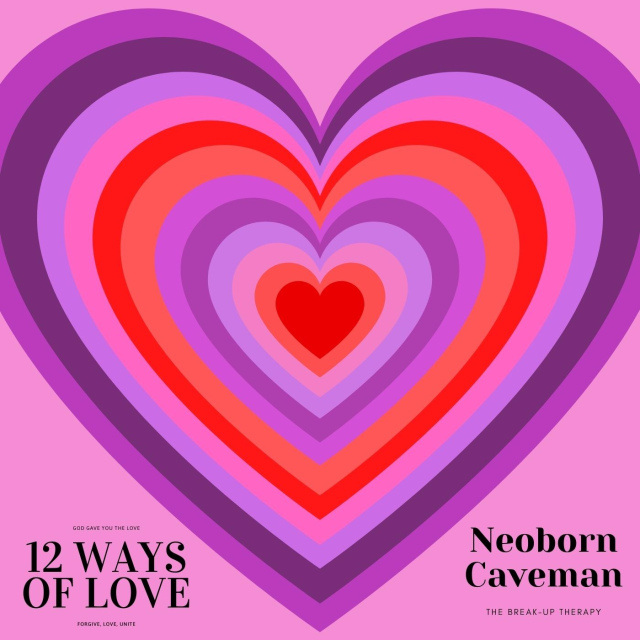 This is the second time we are featuring Neoborn Caveman . Recently I had the chance to sit down and devote my full attention to his new single 12 Ways of Love. Although I was certain that I was in for a delightful experience considering the gravity of  Neoborn Caveman’s reputation in modern music, I had no idea how spellbound I would become by this record’s multilayered, divine drive and unrivalled creativity.

I isolated myself from everything going on in my day to day life and pressed play, and instantly the magic of  Caveman’s skills behind the song reached out and grabbed me by the throat in the opening track. I found myself being transported to a deserted land, where nothing exists except desperation and the never ending search for glory and off course love. Littering my path were enormous strings and synthesized mountains, both of which I would soon find myself trapped in for an indeterminate amount of time.

We grind and gallop our way through the surrounding bleakness and venture into the daze of self-awareness, realizing at once what we must do to reach a climactic oasis. Caveman churns us in a vortex of minor key whirlwinds that sweep us away and refuse to break our tension, even when it feels like we’re on the very edge of sanity. It isn’t until the title track comes to a screeching confrontation between the drums and the melody that we are at last freed from our prison of sonic suffocation, and the release is comprised of pure ecstasy, to put it mildly. Another amazing piece of art from Neoborn Caveman.

How would you describe your new single and what inspired you to release this track?

“12 Ways of Love” is the song of hope and a possible path to make this world and our interconnected lives better. This human history has seen enough bloodshed, greed, hatred and misunderstanding. We are not meant to be like this, at all. I had deeply longed for having a pure song, one our children and our children’s children can sing in a more ideal place, too. And when I found myself once again deeper than rock bottom, Heavenly Parent helped me to understand: all the things pushing as down are just energy and we only need to redirect, re-purpose it, this way becoming co-creators in our very own life. So, I was there, walking in a cold, windy, grey winter day with my little baby in my arms and this tune from the chorus was suddenly in me – and I’m really sure it was God who encouraged me with it. This was the moment when I decided to write the whole “The Break-up Therapy” album as a part of self-healing, pathfinding and trying to show an example and give hope and comfort the ones behind the rainbow and with shattered hearts. This song, “12 Ways of Love” is probably the only truly joyous song I’ve ever written, too.

What would you say you have learnt from the global lockdown due to the Pandemic?

That’s a great question. I would say I found it dumbfounding how societies started to act as a whole. Aside from the natural and obviously truly positive and working health system benefits, I couldn’t really see –as a whole- real maturity either from the people or from the governments. In the beginning artists stood up and laid a foundation to see and understand what it means to help with your own tools – all wrapped in as I feel, truly genuine support and naive ideas. And it’s gone. It was never a question that establishments or corporations with their secluded lives and high arrogance would never take on this but it was astonishing to see how easily and relatively quickly almost everyone turned back to their ordinary lives. A thing partly I can understand, yet, how could anyone truly be satisfied and happy or even think of that while others are still suffering? Science has proved in many ways, everything and everyone is linked together. So, when a sibling of mine is suffering is it enough to say “I did my part, that’s it”? Think of this: when your leg or arm is in pain what do you do? You want it to be healed again, don’t you? So, there is ONE planet, ONE human race, ONE way of life and that is TOGETHER. And I love this word, since it’s already an action, something we let ourselves believe we shouldn’t do: TO GATHER. So, ultimately I learnt, despite all the religions, all the philosophies, all the great people we are still almost there where we as humanity started: self-indulgence and ignorance combined with jealousy and greed. No-one will change this unless we do it even it is unprecedented. Don’t wait for others and don’t listen to your inner naysayer making you weak. We all have the greatest capacity to love and achieve greatness in it. It’s up to us; it’s up to us today.

What is your hope for mankind and how would you play your part to be the change you would like to see in the world?

Again a good question, thank you. It would be easy to say let’s sing our “Kumbaya”-s and everything will be OK. It won’t and it shouldn’t. The bad things ought to come out from our system. Just when you have an upset belly, things need to come out either way or the condition will worsen. And now there isn’t more to make it worse. Although the numbness is so rampant that the movie “Idiocracy” already seems to be a documentary. Upside is, we have now tens of millions standing up and more and more connected for the sake of the whole. Statistically, 3.5% of a population needs to agree to start real, fundamental changes in life. We haven’t reached that either globally or in any societies. We need awareness on our soul and that our spiritual life is way much longer than our body’s endurance. That is where our feelings of eternity and longings for abundance coming from. We lost it. And we have now a blind science and purposeless faith all around making us weak even to be a blessing, even to grow from one stage to the next one. It’s not easy, ask the children.

The other day I was talking to my former pastor. You know, it’s good to self-check in several ways. And he told me at the very least he would be OK to be fertilizer for something better to grow out from his contributions and actions, his life. It’s not giving up; it’s making peace with yourself and your situation.

I always wanted to be “Bon Jovi”. But that job is taken. I haven’t become either “Sting” or “David Bowie”. And I shouldn’t. I am me; I have strength to be myself. We all have our uniqueness inherited from Heavenly Parent.

So, my place is to stay young in heart and with constant re-determination help others to grow and let myself to shine to lay a path and show an example – at least for now.

What can your fans expect from you in the future?

So many things. I’ve launched “Music Authentic”, a different kind of music and art site to support others and help them to create their mementos. I’ve just finished writing and directing a webseries titled “Somebody Is Living My Life” with the contribution of the talented Paul K Stadden and good hearted Josh Bovington. This will have a worldwide release and a special edition this autumn. Another song “You Were My Saviour” will come out soon. But just before that, as a surprise gift to fellowmen and fans, a summer farewell single “Now I’m free” will come out 20th September. It’s really different from what I usually make, so, as you can see, I’m trying to grow even if it comes with heavy butterflies sometimes…

And my second album, “mirrors have just muted cries” is already in the making with some truly talented and great indie musicians on it.

Where can fans listen to this single?
Everywhere. Literally. Even in China. And even the crickets in Africa are practising the chorus part of “12 Ways of Love” as I heard. Though still a long way for them but they are not giving up as I know them..
…I do hope there will be a music video for this song but until that, here are the links for Spotify, AppleMusic. Spread the love, share the word! Be Blessed!

Listen to “12 Ways of Love”  using links below;