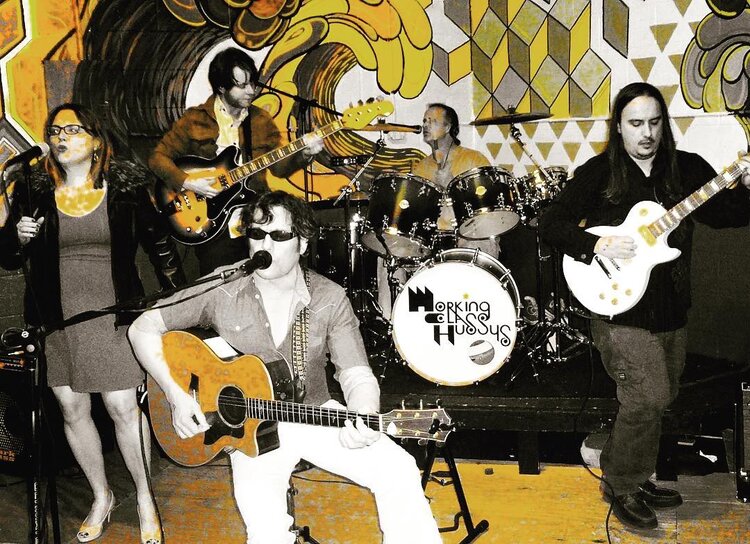 Central New Jersey’s Working Class Hussys are the hook-heavy Americana/rock band that’s about to redefine roots music. Led by multi-instrumentalist and songwriter Ian Patrick Gentles, the band puts out a sound that deftly blends soaring harmony vocals, crunchy guitars, and big choruses into music no other group could make. Gentles spent a dozen years as an open-road trucker and comes by his American twang honestly. As such, Working Class Hussys use Southern, Heartland, and Alt-Rock influences interchangeably to create unforgettable original songs about the lives of everyday people. The Hussys will be dropping a series of eclectic singles in 2020 that will blow minds and bring the group to a larger, worldwide audience.
Unable to tour due to COVID-19, Working Class Hussys continues to write, record, and build for the future. Gentles works daily to find new ways to connect with fans old and new and remains committed to creating and sharing his music in defiance of our current circumstances. He’s been using the miracle of live-streaming to perform on Facebook and Instagram, which has infused his songwriting with new life, and is eagerly awaiting being able to play for a live audience again soon. Working Class Hussys bring the magic of the South to New Jersey and beyond. Fans of great original rock music need to get hip and start listening.

We decided to catch up with Ian Patrick Gentles who is the band visionary, singer/songwriter as they release their brand new single Things That You Do – which is  available today (Friday, 19th of Feb) on /VEVO/Spotify/Apple Music..   The song came about when both Ian and  soon-to-be wife, Patti were living in Nashville, Tennessee during the fall and winter of 2011-2012. He stood in front of the faux fireplace in their living room when the main hook/chorus melody of this song suddenly popped Into his head.  He quickly captured it on his voice memo and filed it away in the hopes that he could someday work it into a completed song. Fast forward several months: Patti and Ian moved back to ‘Jersey in preparation for their upcoming wedding in June. It was during the month of  March when a music producer (possibly someone we met during our stint in Nashville..?) reached out to them in search of a hip-hop inspired song that they could collaborate on.

Things That You Do  is explosive, guttural and creeping  out of the silence like a freight train running off the tracks and out of control, the lyrics that we come in contact is by far the flash point of all the lusty charisma this song has to offer. As dynamic as their overall sound is, Working Class Hussys are defined by their assaultive approach to music and in “Things That You Do,” they pledge their allegiances in quality and style.

Aside from the riffing, the general production featured in this single is definitely as brutish as they come without tripping into the stylistic pitfalls that come with overdriven excess. Most every component in “Things that You Do” is contributing to the flood of distorted carnage that flows from our speakers from the moment we press play to the very instant in which the band’s throttling grooves disappear into the darkness from which they were born, and in terms of efficient songcraft, theirs is an attitude I’d love to see some of their rivals adopt in the future.

Our Interview with Ian Patrick Gentles

What inspired you to get into music?
I was given a small guitar at age 7 and could not be separated from guitar basically forever. I was eventually classically trained and studied Jazz. I’ve been writing songs since my teens and have been in bands with my brother and friends for years. Working Class Hussys is my own project and vision going forward from those experiences.

How would you describe your music?
Ideally we are like a 8 piece band with three singing girls on the harmonies in a row on the stage. It all has a working class feel.

What would you say is your recording and song writing style?
It’s an eclectic mix of 70’s inspired base lines and catchy melodies disco beats and occasional harmonies. Somehow it all works together to be Americana southern influenced Heartland Rock.