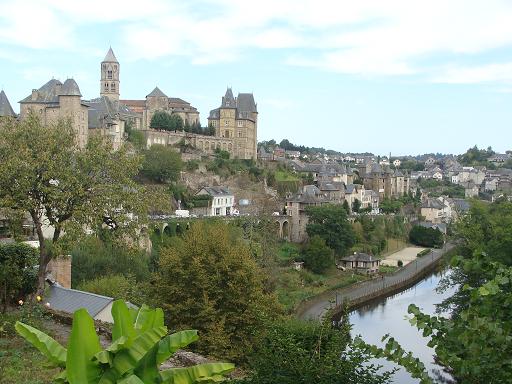 Limousin is one of the 27 regions of France. It is comprised of three departments: Corrèze, Creuse and Haute-Vienne. So,last week i boarded a plane from London Stanstead airport enroute to Correze with one mission to re-energise, relax and discover the great landscape, people and culture of this part of France. As i got to Stanstead airport, i was reminded of the last time i travelled by Ryanair which was may be 10 years ago. The amateur dramatics was about to get even more cumbersome when out of the blue a rather beautiful Ryanair flight attendant decided to fast track things by putting my luggage in free of charge. Now, i wished i had taken her name to say ‘thank you’ personally. Suddenly i became a big fan of Ryanair, so with a smile back on my face and faith in humanity restored i was ready for what was going to be an adventure. The plane landed at Brive airport after a two hour journey and as i arrived at Brive,  i was picked up by Regine Chassagne who Heads the Tourist Board . Regine who has spent several years working for Correze Tourist Board is both proud and passionate about  this part of the world which according to the 1851 census recorded a population of 320,866: which remained relatively constant for the rest of the nineteenth century. until the population steadily fell during the  twentieth century.

During the nineteenth-century the railway planners, influenced in part by the department’s topography, endowed Brive-la-Gaillarde with good connections and a major junction from which railway lines fanned out in six different directions. The railways arrived in 1860, at an opportune moment, directly after phylloxera had destroyed the local wine industry. The new railways enabled the farms in the area surrounding Brive to specialise in fruits and vegetables which they could now transport rapidly to the larger population centres of central and southern France. Locally, the new agriculture triggered the development, in the Brive basin, and was the catalyst to  related businesses and industries such as the manufacture of jams and liquors, as well as timber/paper-based packaging businesses and Wall nuts … “Don’t forget about Walnuts” commented Regine as she took me for a drive and walk through the towns and landscape of Causse Correzien. We ended up settling for dinner at “En Cuisine” in Brive . A chic restaurant with great interior design and amazing food. After a thrilling menu, I was ready for a relaxing overnight stay at the Lissac Castle which boasts stunning views over the Causse Correzien Lake.

The next morning, i managed to get up at 9 am for a big breakfast and  tour of Lissac Castle. It was a quick one since we had long day planned ahead. First stop was to discover the clifftop village of Turenne and its castle with guide Francoise Layotte who despite a recent surgery on her throat showed strength and courage as she climbed the clifftop village with a passionate lesson about the history of Turenne. It is one of the most beautiful villages of France and also has a well-known castle which we were lucky enough to visit. Turenne sits on top the Martel Causse, a limestone formation which now supports rich forests as well as intricate caves. The region is quite hilly, and is cut through by the Dordogne and Vézère rivers, which provide nearby activities such as canoeing. The local economy is primarily agricultural, with a fair amount of tourism. The region is known for its excellent produce, including walnuts, mushrooms, truffles, and foie gras. The first lords of Turenne appeared in the 9th century. The town became a  feudal state after the Crusades and one of the great fiefs of France in the 14th century. From the Middle Ages to the 18th century, the viscount of Turenne had complete autonomy. Until 1738 the sheriffs, despite honoring the French king with simple tributes, the  free of taxation and acted as true sovereigns; convening the Estates General, raising taxes, coining money, and ennobling. The Viscounty formed a state within a state. Thus, when the king banned tobacco (introduced in Aquitaine in 1560), the measure did not apply in the viscounty.

The fiefdom of Turenne occupied a territory bounded by three provinces and three bishoprics. Part of the Périgord Noir (Black Périgord), the fiefdom was adjacent to Lower Limousin and Quercy. It controlled the transfer of livestock between the plateaus of Quercy and Limousin, At its largest in the 15th century, it spanned from around Meymac or Lapleau to the north-east, Terrasson to the west, and Gramat to the south. At that time, the major fortified cities of the Viscount were Argentat, Servieres, Beaulieu, Gagnac, Martel, Saint-Cere, and Turenne; other walled cities included the bastides of Bretenoux and Puybrun, the cities of Carennac, Vayrac, Curemonte, Meyssac, and Collonges. There are now about 100,000 inhabitants in the entire region, divided into 18,500 “feux”, 111 parishes, 1200 villages, and many monasteries.

After we descended what felt like a travel through the medieval times, we said our ‘aurevoirs’ to Francoise and left for an excursion to Collonges-La-Rouge .Collognes-La-Rouge is known for its red stone buildings and is officially headquarters of the National Association of France’s most beautiful villages. We had lunch at Benges guesthouse and met young chef Christophe Chanel who doesn’t only have a designer surname to match. His menu was deserving of his own TV show and at 25 i think Jean Christophe Novelli has some competition in the new Christophe.

After the well deserved lunch and great service by  staff, we departed to Curemonte, a medieval village home to 3 castles and 2 churches.Located in a fortified position on a ridge overlooking a valley on both its eastern and western flanks, the village has historically had a strategic importance in the area. When Regine finally mentioned that our next destination was Bas Queyssac Winery, i was excited to see where The Vin Paillé (Straw Wine) of Corrèze a sweet apéritif wine was produced. Nestled in the Domaine du Bas Queyssac with the energic Jean Louis Roche at the helm. This space is  armed with solar panels which is advanced for the area. Jean Louis Roche produces the celebrated Vin Paillé of Corrèze, also called Le Miel des Muses (Nectar of Muses) and some of the electricity produced by his solar panels is also sold to the government. He produces a sweet wine (both red and white), which is a delightful apéritif, also ideally served with foie gras, cheeses such as Rocamadour, Cantal, Salers, and with deserts. Vin Paillé has been produced at the Domaine du Bas Queyssac for several generations. Towards the end of the 20th century, several local producers got together and created the Syndicat du Vin Paillé, each one maintaining his specific family tradition and know-how. As Jean Lous Roche explained , its all about “quality and not quantity”which seemed to be the motto for all local businesses in the area. I was also quick to suggest the UK as a relevant market although Roche believed the British might not be big fans of ‘sweet wine’. I reassured him that there is always a niche audience when it comes to alternative wine consumption. After the fantastic wine tasting, we got in the car and Regine kept mentioning that we were off for dinner at Mrs France’s castle . I honestly thought she meant Miss France (the beauty pageant winner) was getting ready to cook me dinner in her castle. Now, i was excited to say the least but not disappointed to find out that it was actually the charming and even wonderful Mrs France aka Ann who together with her husband run the Chateau de La Greze  which is located 45 minutes by car from Brive-la-Gaillarde and its train station, and 26.7 miles from Brive–Souillac Airport, Château de La Grèze has free on-site parking and is a renovated 18th-century castle located in Brivezac. Free Wi-Fi access is available.

The bedrooms have a private bathroom with bathroom amenities, bathrobes and a hairdryer. Extras include a desk.
In the morning, a continental breakfast with homemade produce is served. Upon request, regional evening meals are also available, as well as cooking lessons.At Château de La Grèze you will find a garden and a terrace. An array of activities can be enjoyed on site or in the surroundings, including horse riding, cycling, hiking and table tennis. Later that evening, we assembled in the lounge for some canapes and introduction to Mr. France and guest Antoine and a young, Louise who at age 13 is already an expert in horse riding, technology and off course all things ‘Rihanna’. After, a great dinner and wine menu the conversation took a turn for the better with an exploration of what the secret of happiness and the psychology of the human spirit and mind truly means.A rather brilliant , deep, meaningful and unexpected end to what was a special night. I got up the next morning feeling fresh and ready to go as we were about to discover the medieval town of Beaullie-sur-dordogogne. This area is also known as the ‘Limousine Rivera’ and a quick walk through Argentat, the homeport to traditional skippers in the Dordogne Valley we grabbed some lunch and headed to visit former President Jacques Chirac’s contemporary history museum. The museum features a collection of the temporary press photography exhibition by Christian Vioujard and a showcase of all the gifts received by several heads of states from around the world. Very insightful to find out what Bill Clinton gave Jacques Chirac as a parting gift.

After a very eventful last day, we called it a night at the beautiful Hotel Joyet de Maubec in Uzerche owned by the talented business partners Daniel Ramos and Thierry Boisaubert who both decided to put their passion for hospitality, design and service to good use by launching a hotel that is literally second to none in the area. Located in the heart of the old town of Uzerche, so called “the pearl of the Limousin”, the Hôtel Joyet de Maubec was once an old private house from the 16th and 17th centur and both Daniel and Thierry completely transformed it into  something really special. This charming hotel decorated with a mixture of old and modern style, will welcome you in a sophisticated and relaxed atmosphere.
The 8 rooms all different, will offer you an exceptional view of the vallée de la Vézère or the old town.
The restaurant, La Treille Muscate welcomed us with some Champagne for starters and a thrilling menu served in our seats near by the fireplace.

As i retired to bed that night and arose the next day which was to be my final day. It was only fair to pop into town for some liqueur and wine tasting at Denoix. Now, Denoix is one of the oldest distilleries in the region and in France as a whole. Established in 1839 and located in the Brive-La-Gaillarde . it’s clear to see that even after it has been handed to several generations the distillery is still in tact and a quick guided tour and perfect tasting session left all of us gasping for more.

So, as i headed back to the airport contemplating the best way to describe this wonderful place in the middle of France. Regine who had been my trusted tour guide through out this wonderful journey whispered ” Correze is a place to discover, landscape, peace and tranquility” . I in turn replied “That will be my headline”.