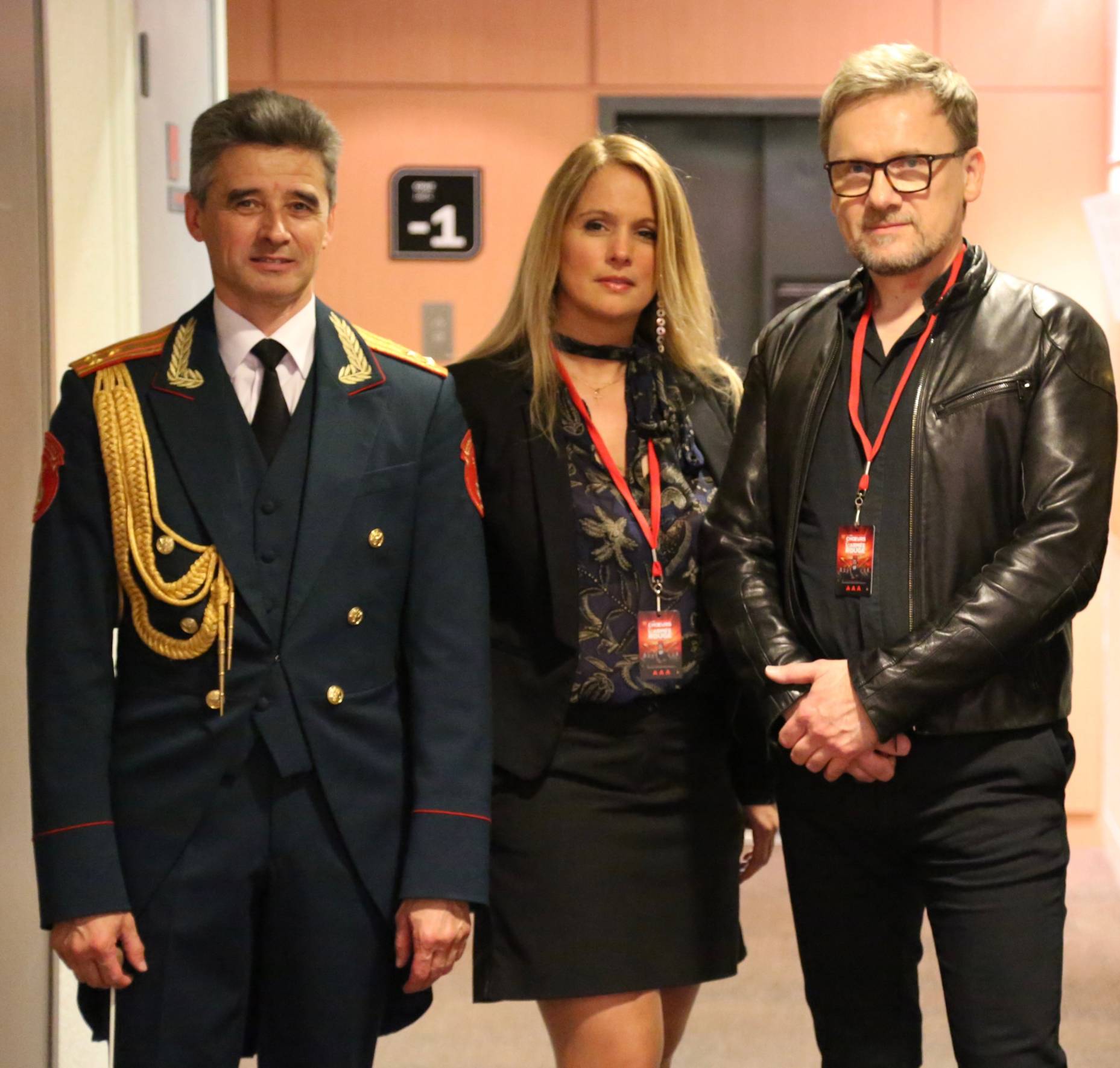 The Red Army Choir celebrates the 90th anniversary of their creation. Since October 1928, the Alexandrov Ensemble has never stopped performing on every continent. Few people know that since 1990, it is a French company led by Thierry WOLF that allowed this prestigious ensemble to make brand new recordings and performed internationally. We interviewed the CEO of this long-time production company (founded in 1981 in Paris – France).  We decided to conduct an interview..

How did you become the international producer of the Red Army Choir ?
Our company had already produced in Russia many albums and videos of the famous Bolshoi Theatre and my colleague Willy Wenger wished to produce an album of the Alexandrov Ensemble which had not recorded since long. We were at the dawn of 1990 and the political landscape in Russia had changed, giving way to private companies initiatives. This is how our French independent production company, represented in Russia by Natalia Tkachenko, was able to license the music rights of this prestigious ensemble and then produce original recordings. The first project we proposed to the Alexandrov Ensemble, then directed by Victor Feodorov, met a huge success since we were double gold disc. From the beginning, our collaboration has been marked by success.

As for the Bolshoi, I did not want to stop at the recording of music and so we were interested in videos and finally to bring back the Red Army Choir on stage since they no longer came to Europe, and that false troops imitating them were proposed to the French public in particular. After seventeen year of efforts, we have managed to find partners to help us bring the Alexandrov Ensemble back to France, for the first time in 2003 ! Subsequently, we continued our work (especially with other Russian ensembles as well) and then decided to organize again a big tour of the Alenxandrov Enesmble to celebrathe the 90th anniversary of their creation.

You are the head of FGL PRODUCTIONS which has produced very different artists – Petula Clark, Iggy Pop but also Jango Edwards, Francis Lai, Michel Legrand, the ensemble Mazowsze, many rock bands even classical music with the Bolshoi Theater, launched the career of french tenor Vincent Niclo with the album Opéra Rouge, you also produce the son of Joe Dassin (Julien Dassin) at the international… Why so much diversity ? Isn’t it difficult to move from one artist to another ?

I think that in life, a person who would only read the pink library would miss out on many aspects of litterature 😉 It’s the same for music ! It is not difficult to work with the Red Army Choir when you produced Iggy Pop or Lio (80’s lady french singer). Sometimes it’s easier to manage 100 artists of the Alexandrov Ensemble than a single lady singer… Conficius wrote « Choose a job you love and you won’t have to work a single day of your life ! »
There is also a very important emotional dimension to our work. Jango Edwards, or Julien Dassin, all theses artists have become our friends or our children and we work with them as a big family. When Colonel Sachenyuk took the lead of the Alexandrov Ensemble, he knew how to bring a new stone to the building of this already prestigious ensemble. Our daily works is to make our artists shine. Few people know our existence and we are well in the shadows of our stars. When artists have talent, everything is easy.

How do your organize your work ? Do you accompany the Ensemble on various tours around the world ?
I must be the man on earth who saw the most the Red Army Choir on stage… With some members of our team (Nathalie Lallement or Florestan Lejeune in particular) we have seen their show countless times !
I like to be at the heart of the audience, feel their reaction, and then talk about it with the artists. For example, I attended the celebration of the creation of the Ensemble in Moscow at the Bolshoi in October 2018. The program prepared by Maestro Sachenyuk was so interesting that I asked him to use many pieces of this show given in Russia for this international tour. Gennadiy Sachenyuk is a meticulous conductor who knows how to get the best of his artists.

Is it difficult to organize concerts of the Red Army Choir ?
Every time, we tell ourselves that we have to be a little bit crazy because it is not nothing to move so many artists. Logistics and technology are multiple puzzles and problems that we need to solve. But we have excellent teams. Especially the technicians led by Eric Portier who has been with us on several hundred concerts. Yes, it’s very complicated, and the audience would be amazed at what’s being done so that they can quietly watch a 90-minute show.

What can you bring to Russian artists ?
The Russians have a solid formation. Whether it is the Bolshoi, regional ensembles or the Alexandrov Ensemble. All these Russian artists have an incredible palette that is the result of an enormous amount of work. In France, I have not yet met a choir that has this dimension. I have worked with many artists but the Alexandrov Ensemble is precision mechanics. However the most beautiful piece of jewellery needs to be showcased, and our sense of design, our « French Touch », also brings this to the Red Army Choir, and all the international artists we have been able to work with. We help in the selection of titles, make redrawing all the lights especially (in terms of light the French are definitely the best in the live show), created the logo of the Red Army Choir by a French designer (Fabrice Trovato) only twenty years ago. It is also up to French creators to draw posters (Frédéric Menant in 2019) or French directors to film them, as was the case at the Casino de Paris (Christophe Mourthé), etc.
The combination of Russian talent and precision, with a sense of French aesthetics, culture and art gives excellent results. No one better than me can say that the Franco-Russian mix gives good things… Since my wife is Russian and we gave birth to a little girl who is the result of the mixture of these two great countries of culture.

Tell Me About this new album LENIN ALBUM ?
This album offers an anthology of songs that have marked the revolutionary history of Russia. It is part of a diptych with the “Stalin Album” which was interested in the history of Russian musical works under the dictatorship of Stalin. Lenin Album is especially part of the work we have done for the commemoration of the victory over Nazism which celebrates its 75 years and of which the Russians, like the English, were the very great heroes in Europe. What we sometimes forget to mention. Obviously and as always, this work is apolitical because we are not subject to any state company and above all, we are not politicized! We are neither communists nor pro-government but we do work on history and music also have an important part in the history of the world … Thus, the predecessors of current artists were on the battle songs to go up the morale of troops fighting against the Nazis.

Other projects with the Red Army Choir?
Our concerts which were to take place in Italy next October, in particular at the Academy of Verona had to be canceled because of the coronavirus pandemic and the Ensemble was confined until the beginning of June before making its return on stage on 24 June in Moscow for the festivities celebrating the 75th anniversary of the victory. I am currently working on a new European tour, probably in 2021 or 2022 in France, Switzerland Belgium, etc but before that, we hope to return to Canada next December, as we did in December 2019 where we produced the last dates of the world tour which will have seen the Ensemble Alexandrov perform in many countries such as France, Switzerland, Belgium, Serbia, Czech Republic, China, etc.

What about England?
We were scheduled to perform at the London Palladium in April 2019, but we ran out of time to finalize all the formalities necessary to perform in the UK. But it’s one of my goals to bring the Red Army Choirs back to England where the public always greets them with great favour.

For more information on Red Army Choir. Follow the links below;