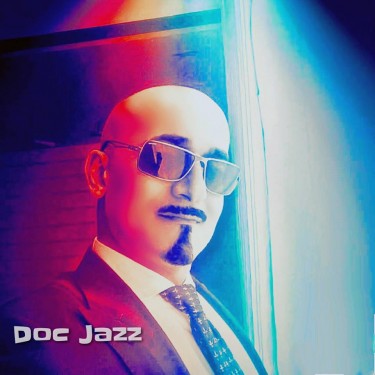 Introducing Doc Jazz , a singer, songwriter and multi-instrumentalist born and raised in the Netherlands but currently residing in the United Arab Emirates. He has released a large number of songs over the years in a wide variety of musical styles. The majority of his tracks lean on funk, jazz and rock as their main ingredients, usually blended into a pop music format.  Doc Jazz has gone all out for his brand new single “Twenty Twenty” .  The single showcases amazing production and content is certainly one that new fans will definitely get into as it is the perfect introduction to the music of the singer/songwriter a multi-instrumentalist.  The first time i listened to Doc Jazz’s new single  “Twenty Twenty”  it took me through  a journey of self-discovery especially when you are trying to do the right thing and you are tired of hiding.  Doc Jazz in grand form literally speaking up for the minds of millions who have gone through what has been a poignant period in their lives. Millions of us have encountered individuals who pretend to do the right thing but the truth is that it’s more smoke, mirror and perception rather than reality. With lyrics like “Trying to hide your vices, my suspicions rises. Why do you think you can do me wrong. I can see what’s going on”?  you can interpret from the songwriting various scenarios which all leave the author with the main point of having “Twenty Twenty” vision which i guess in this case will be the ability to see through smoke screen and mirrors to the real truth hiding beneath the lies. Doc Jazz’s  vocals are adept for facing down any challenge that comes along.  He really makes great drama out of the song’s lightly ironic twist and brings an appealing combination of grit and melodicism to play delivering the song’s lyrics. Much like the arrangement, Doc Jazz’s lyrics never waste a word or any of the listener’s time and hit upon an accessible, conversational tone without ever dumbing down the adult subject matter. The climax of the song breathes depth to what happens when ignorance meets deception. The consequence is… “Regret”. There is a strong message in “Twenty Twenty”,  one that is best left for you to listen with a fresh ear and come to your own conclusion as it applies to your life. Are you the one hiding from the deception or are you the one who is capable to see 5 steps ahead? You decide..

We decided to catch up with Doc Jazz for an exclusive interview with Camden Monthly Newspaper..

What inspired you to get into music?
As a child, I was always intrigued by pop music, and when I found out that I actually had the ability to create music on my own, I became a self-taught musician and songwriter on several instruments, mainly guitar and piano.

How would you describe your music?
I always used to say that my music has the taste of rock, the scent of jazz, and the feel of funk. Nowadays, I guess I must say the rock element has decreased a bit in my more recent productions.

What would you say is your recording and song writing style?
I like to take charge of my own production process. I try to ‘sculpt’ the soundscapes of my songs into tracks that are pleasant to the ear. I try to make sure that I capture the listener’s interest from the beginning of the song until the end. I want it to be something that they would play over the stereo system in their car, like something that gives them a good, positive feeling.

Where would you like to see your music career in 5 years time?
I’ve been doing this for so many years now, that I kind of stopped having very high ambitions. However, like every other musician out there, I still want to some day put out that one song that people just can’t stop listening to.

Where can music fans listen your music?
My YouTube channel has most of my songs: https://www.youtube.com/channel/UC-g5A2kAe84cWaChKHNgR3A
and
My Spotify link is here: https://open.spotify.com/artist/0I1vJzlcvka4aI9hAmcWGu