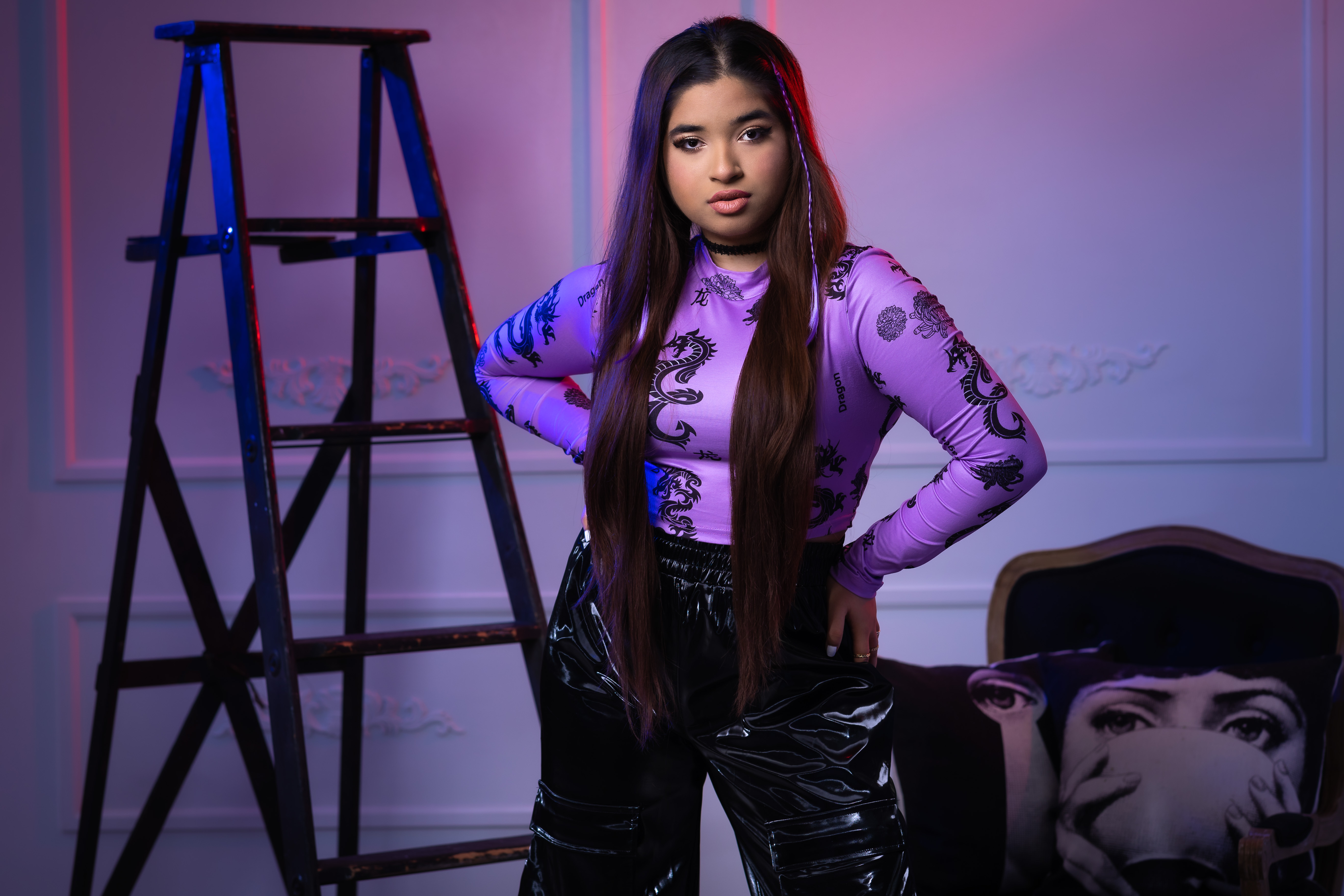 Emerging teen talent, professionally known as Cmagic5, is a high-octane Canadian singer/songwriter and musician.
At age 4 she began performing in musical theatre, dance performances, and vocal competitions. By 10, she had
written and composed her own songs. She completed her music theory and classical vocal training from the world-renowned Royal Conservatory at 16 and is a qualified vocal mentor today. She is also an ambassador for mental health awareness on various platforms. What is commendable is that Cmagic5 manages to excel academically as a first-year University student, whilst being a self-managed artist! Cmagic5 has a unique, confident, and vivacious style that are representative of some of the brands she has collaborated within the US, Canada, and Dubai. With her rich, mellifluous, soulful vocals coming from a petite frame, Cmagic5 has the power to evoke a profound response. Her music is contemporary pop with a refreshing blend of old school vibes and futuristic sounds with the uniqueness of her sound created by fusing other sub-genres. By many, her voice has been defined as a cross-over between Toni Braxton and Dua Lipa. Hot on the heels of her recent pop release “Lego”, which is an “ode to yourself” taking her soaring to 5.5+ million plays and counting, across all streaming platforms, Cmagic5 is on fire as she has just released her new single “The One” from her highly-anticipated debut album. This is yet another showcase of Cmagic5’s prowess for exploring varied musical landscapes with profound relatable themes.

We decided to catch up with Cmagic5 for an exclusive interview on Camden Monthly..

1) What inspired you to get into music?

Cmagic5: I believe that music chose me. My parents say that I started humming before talking. My passion for singing and performing manifested itself when I was very young and began my journey performing to a living room audience by the age of 5. The inspiration for writing songs was innate and I had written my first song at the age of 6. By the age of 10, my articulation developed and I had written and composed my very first original song. The lyrics were very pure and straight from the heart. This ignited my creativity as Cmagic5 and encouraged me to pursue songwriting. For as long as I can remember, music has always been an integral part of my life.

2) How would you describe your music?

Cmagic5: While the genre of my music stems from pop, the uniqueness of my sound is created by fusing other sub-genres into my songs, such as pop/afrobeat/trap like my most recent release “Just Wanna”, or soulful R&B like “You don’t know”, my previous release. I like to give every song a different vibe with its own identity through my voice and songwriting style. By many, my voice has been defined as a cross-over between Toni Braxton and Dua Lipa. My music is contemporary pop with a refreshing blend of conventional sounds and futuristic vibes. My singles from my forthcoming debut pop/rock album which will be released by early 2021, explore the themes of self-empowerment and love, rendering a positive message of self-confidence and healing, which is needed now more than ever.

3) What would you say is your recording and songwriting style?
Cmagic5: It’s like magic! Whenever I get into the studio, I always feel a rush of adrenaline that I think is personal to every artist. Being able to express all of my ideas, let my creativity flow, and bring those ideas to life, is a feeling and experience I am so grateful for. For my recent single “LEGO”, I had the melody of the hook resonating in my head for the longest time. I think that is the whole beauty of it – starting with something so raw and exploring the different directions you could take the song to, is my favorite part of the creative process.

My music has been greatly inspired by real-life experiences and is a blend of reality and my vivid imagination. When it comes to my original music, I always try to ensure that the instrumental music and song melody alone, are powerful enough to tell a story. Writing a song truly does feel like some kind of alternate universe that I never get used to, no matter how many times I’ve composed a song.

My writing style is vivid and direct to my listeners. It is such an intimate process and takes you on a journey of self-discovery. Sincere and entirely relatable, my music communicates feelings of truth, freedom and empowerment driven by captivating vocals. It encourages people to live their life to their fullest potential by singing along and express themselves through dance.

4)  Where would you like to see your music career in 5 years time?

Cmagic5: During these unprecedented times, it’s kind of difficult to envision the world 05 years from now. However, I would love to see myself as an internationally recognized artist and impacting a wider audience through my music. I also see myself having completed my university studies in digital enterprise management. After that, I hope to go on tours and travel the world, hoping it would be safe enough to do so then.

For now, my biggest goal is to release my forthcoming debut album in January 2021. I am also preparing for some international radio interviews, podcasts as well as digital magazine features. I’m excited to be collaborating on the remix for some of my songs with different producers, and establishing synergies in the future.

5) Where can music fans listen your music?

Cmagic5: Fans, supporters and well-wishers can always tune in and connect with Cmagic5 through any of the following handles. Setting the stage for a promising career ahead Cmagic5 is an undeniable force to reckon with and one-to-watch.