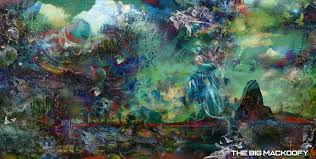 The Big Mackoofy is a group which by their own admission were “Heavily influenced by 70’s African Psychedelia” , think Bowie meets Prince to write a Tarantino soundtrack. Or The Clash, The Redskins, and the Coup joining forces to make an album. What an amazing melting pot of music art? They have three new singles in the works and judging by the sounds of it, they are on to a winner.  The Big Mackoofy have chosen to strategically release these tracks on a brand new streaming site  Top Rizz International which is a resource and platform for musicians and performers. Diving into the first track “When the Acid Kicks in”, you realize straightaway from the title that you are about to hit a journey and what a journey, from the moment we pressed on the play. The magic suddenly kicked in providing you with an appealing degree of sophistication without lapsing into obscurity and self-indulgence.  What I gathered immediately by listening to this track is that The Big Mackoofy has a sharp instinct for creating intensely focused efforts that never waste the listener’s time. In Coked up Mediocre Posh Boys they are at it again with an instrumental intro that suddenly hits you like a cymbal in a street fight. Despite running under four minutes in length, The Big Mackoofy put their best foot forward with this song. There’s a tremendous theatrical feeling to how the band structures the instrumental work in such a compositional way –the wordplay repetition lyrically works to get the listener zoned in. The rhythm section provides a solid foundation on what will certainly be my favorite out of all three.  The final track I had the pleasure of listening to, is Hey Big Old Mister featuring Dave London. This track is much more light-hearted fare, overall, with overtones balanced into the gritty gravitas that the band can frequently bring to their work.  If you are interested in music from a band that isn’t afraid to flex its muscles, but has equal courage for indulging its more melodic aspects then The Big Mackoofy is certainly your best new band.

We decided to catch up with them for a quickfire round of Q&A:

What inspired you to get into music?
In answer to your question, making music for us is as natural as talking and running, its a natural reflex – a good description can be found on our Spotify page (below)

How would you describe your music?
In 5 years we will still be making music-we are influenced by all music from around the world so there is an endless source of inspiration

Where would you like to see your music career in 5 years’ time?
People can hear us on all streaming platforms such as Spotify, Deezer etc as well as Soundcloud

Where can music fans listen to your music?
Find our music following the links below;