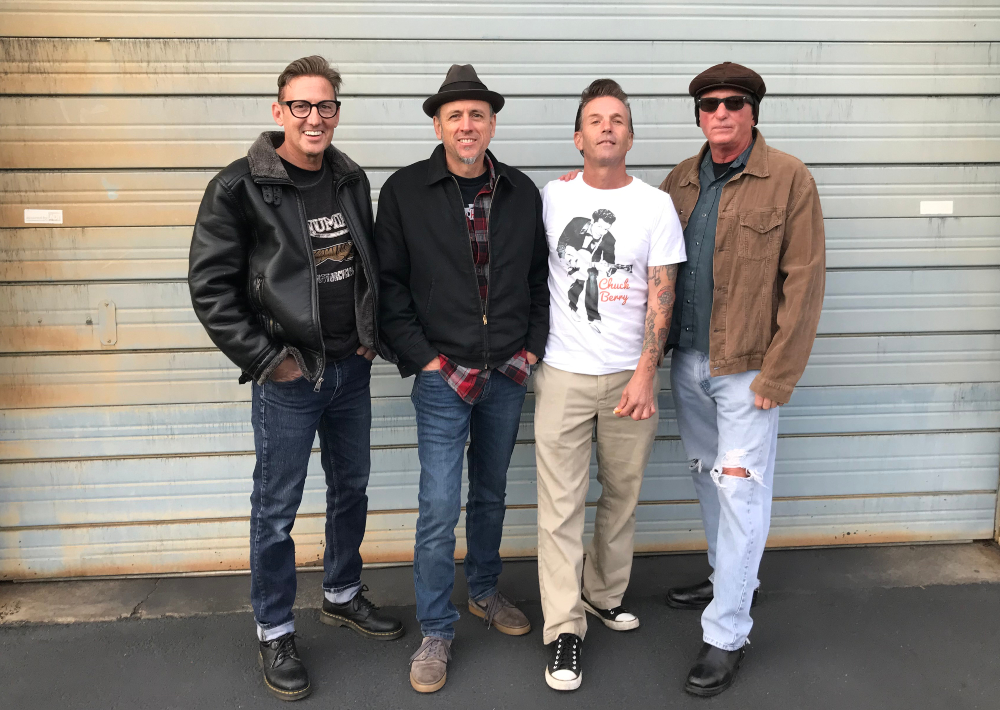 San Diego rockabilly mainstay Jackslacks (a.k.a. Chris Giorgio) follows up last fall’s tribute EP, When Pigs Fly with a full-length album due to drop on June 3, 2021: Inside Out, the singer/songwriter/percussionist’s 11th solo release, all on indie label Shield of Love. It was produced by Jackslacks and Mike Kamoo, and mastered by Steve Wetherbee.

These original songs naturally use the genre as their home base but — as Jackslacks has always been keen for them to do — also dip their respective toes in other beloved springs of Americana, e.g. blues, country, and folk.

These sorts of cameos and their contributions have always been a substantial part of the fun of Jackslacks’ records. His daughter, Taylor Giorgio (a string virtuoso who plays with the Tallahassee and Destin Symphony Orchestras) also reappears here, not just to lend violin and viola to “My Lady Angel,” but to compose the song with him — a first for the pair, and an understandably special moment, personally, for Jackslacks. Her solo and brief outro glisten. And then there is brother Bill Giorgio (Nobody’s Business) who contributes guitar, backing vocals, and — most notably perhaps — sweltering harmonica, to “Ode to an Empress,” a rave-up that harkens back to The Yardbirds’ mid-’60s British blues appropriations. All that thumping, doghouse bass on this album? That’s from Billy Raven (Bill Grubbs), whose uncle, Jimmy Grubbs, found favor in the late ’50s with the rockabilly single, “Let’s Rock Tonight.” Raven also contributes backing vocals throughout Inside Out as well.

Rounding out the new songs is “The Gift,” an upbeat, southern gospel number inspired by a spiritual encounter that Jackslacks experienced on Christmas morning. This one comes complete with some buoyant New Orleans trumpet and trombone work, courtesy of Dave Roof, who also pounds the keys and sings back-up on quite a bit of the LP.

Having shared the stage with many of rockabilly’s progenitors — Carl Perkins, Jerry Lee Lewis, and Chuck Berry among them — with Inside Out, Jackslacks yet again stakes his claim to a place on the “Who’s Who” list of second generation rockabilly revivalists.

The record is dedicated to the memory of all of those we have lost during the pandemic.

What inspired you to get into music?
Received my first two “hand-me-down” records: “Meet the Beatles” and Elvis’ “Golden Hits.”

How would you describe your music?
Roots rock, rockabilly

What would you say is your recording and songwriting style?
We still use a vintage 2″ tape machine to record, going for an analog sound in a digital age. I usually write on an acoustic guitar and use personal experience and social observation as motivation.

Where would you like to see your music career in 5 years time?
The goal is to write, record and produce music that people enjoy … now and forevermore.

Where can music fans listen to your music?
https://jackslacks.bandcamp.com/
https://www.reverbnation.com/jackslacks

Jackslacks album “Inside Out” due June 3, 2021, on indie label Shield of Love.