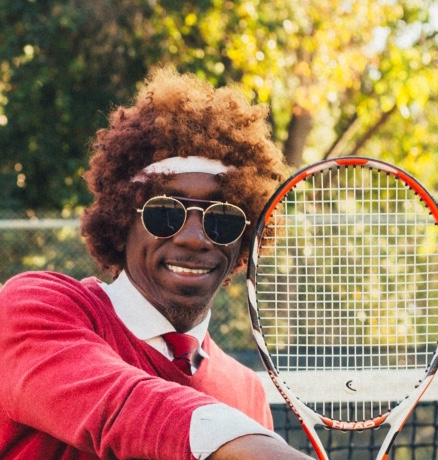 Lovoy has been honing his skills as a rapper for the past several years and bringing the Caribbean and Central American vibes to the big city with his fun fruit-inspired tunes. There’s no better day to check him out than today, National Fresh Squeezed Juice Day!

Originally a choirboy, Lovoy blended his rapping skills with his choir experience, to first express his passions for fruits like Mangoes, Bananas, and Papayas. Lovoy’s evolution into music allowed him to extend his range of talents to include photography and video production.  As the founder of Royal Bukut, an online social media-based record label, Lovoy has the vision of creating kid-friendly productions to share the powerful benefits of fruits in a fun and entertaining way. We sat down with Lovoy to discuss his music and colorful music videos!

Guava highlights Lovoy as a genuine creative force thanks to songwriting that touches on modern needs while invoking longstanding fundamentals. The result is a collection that both younger and older music fans can positively respond to and find both entertainment and serious value. There’s a strong emphasis on atmosphere with these songs. Despite the upbeat thrust of the lyrical content, the music inhabits a delicate, dreamlike soundscape. The title song starts things off and has an amazing ability quickly to capture the listener’s attention. There’s a strong edge to the song, but a close listen to the track is a fascinating study.

We decided to catch up with Lovoy for an interview…

How would you describe your music?
My music is exotic, melodic, and warm.

Where would you like to see your music career in 5 years?
As my music will continue to reach fans across the world on every continent and in the next 5 years I see myself touring and performing across the globe.

Where can music fans listen to your music?
Fans can listen to my music on: