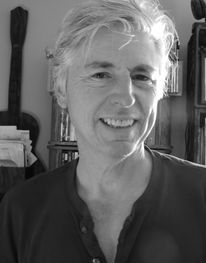 Nick Duane from Providence, R.I. is an American alternative-rock indie songwriter whose style has embraced a wide range of musical genres and influences. His songwriting brings to mind the classic pop-rock tracks that came out of both England and the US during the late 80s and 90s. He has played both Bass and Guitar with several New England regional acts and is a decades-long advocate for original music..Stylistically, his music can be described as indie rock infused with ambient synth-pop…

The arrangement of the new single “The Old World” gives Nick a chance to work out his instrumental talents, but not in a showy way that distracts listeners. The production highlights the song’s strengths in a memorable way and projects a warm sound that never sweetens the difficult message. “The Old World” manifests a couple of different viewpoints lyrical and doesn’t back away from the subject matter at all. Nick Duane has every bit of the storytelling skill you’d expect from a great songwriter and him more than lives up to the reputation he’s established over his career.

“The Old World” could get up on its soapbox and take a high and mighty tone, but Nick doesn’t opt for pandering to a certain segment of his potential audience. He takes a different approach with a song that has more appeal to anything I have heard during the month of December.

The tone he takes with his vocal stresses the mood of the song is one of seeking to comprehend the things that drive people to this state rather than pointing fingers and finding fault. Some may hear the lyrics differently. It’s a testament to Nick’s talents as a songwriter that he leaves this an open-ended question for listeners, but others will hear these lyrics and detect where Nick’s sympathies lie quite clearly.

The musical backing is awesome. Much of the song, instrumentally, focus on the guitar playing, but there’s a nearly equal space in the song’s sonic mix for organ and it contributes much to the song.

What inspired you to get into music?
The music of both the English Invasion & Chuck Berry. It all began… back in high school a good friend of mine was a guitarist, one day at his house he showed me the bass part to a Beatles song and I was hooked. Not long after I became the bass player in his band.

How would you describe your music?
Rock influenced, just songs I make up.

What would you say is your recording and songwriting style?
Indie Rock/Alternative/Singer-Songwriter.

Where would you like to see your music career in 5 years time?
5 years ago I was asked this same question in an interview my answer was,”I can’t always be concerned with trends. I’ll continue to write what I’m feeling, and hopefully there is an audience”. I would have to stay true to that answer I gave then because it is still true today. Of course, I wouldn’t mind my music being more popular, to leave something behind of some worth. Wouldn’t anyone want that?

Where can music fans listen to your music?
Spotify, Itunes, Soundcloud, Bandcamp, YouTube…most of the usual locations.