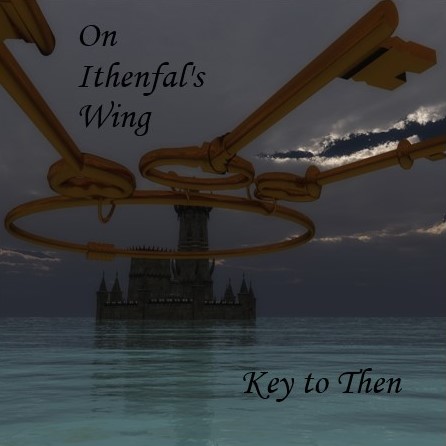 On Ithenfal’s Wing is a progressive / alternative rock band with certain metal qualities from South Florida. Debut and semi-concept album Key to Then, as well as follow-up concept album, A Fine Light Snow, are out now available for download and streaming.

Rarely does an album leave me not knowing what exact words to use in describing it as the  Key to Then did. I felt many emotions based on each track which makes me truly feel that the South Florida  based band put a lot of thought & work into every detail of the album. Each song had a unique story to tell with some of them striking a big chord with me due to relating to current situations in my life.

The album opens with  Once Beneath a peaceful moon whose upbeat feel & vocals drew me in.

Between the Shore and the Fog was a very interesting song as one would thing it was a catchy upbeat song until you really pay attention to the lyrics & see how it is a  story about two polarities.

My interpretation of A Haunting farewell is that it talks about the times you just need to be away from everything & everyone for some time, a feeling I & many others are too familiar with.

Awakened was very interesting to me especially the chords at the beginning which reminded me of the Lynyrd Skynyrd’s Free Bird.

Bugbear was another classic track. The album closes with the self-titled  Key to Then which I admit did not know was on the album until I once again took a look at the track listing. While I was listening to it, I could not help but think it is an absolute hit. They saved the best till the last.

In closing, I can’t express enough how much Key to Then  as I find something new I love about it with every listen. My only regret is that it took me this long to check it out. The good thing is now that I have, I can listen to it as much as I want which I have definitely taking advantage of!

Hopefully in the near future, I will be able to also write a review of how amazing they are live as if the album is any indication, it could be one of the best shows I have ever seen! But in the meantime, we managed to track them down for a brief Q&A Interview exclusively for Camden Monthly..

What inspired you to get into music?
Many bands such as Iron Maiden, Pink Floyd, Radiohead, The Cure, Opeth, Amon Amarth, Megadeth and many more were influential and took part in inspiring On Ithenfal’s Wing to start writing and recording.

How would you describe your music?
On Ithenfal’s Wing’s music may be described as a mixture of folk, rock, metal, acoustic and goth with a range in dynamics and vocal styles all reflecting aspects of life and experiences such as illness, time, death, imprisonment, fantasy, tyranny, injustice, revenge, courage, strength, love, etc.

Where would you like to see your music career in 5 years time?
In 5 years time, would like to be touring with 2 more albums recorded.