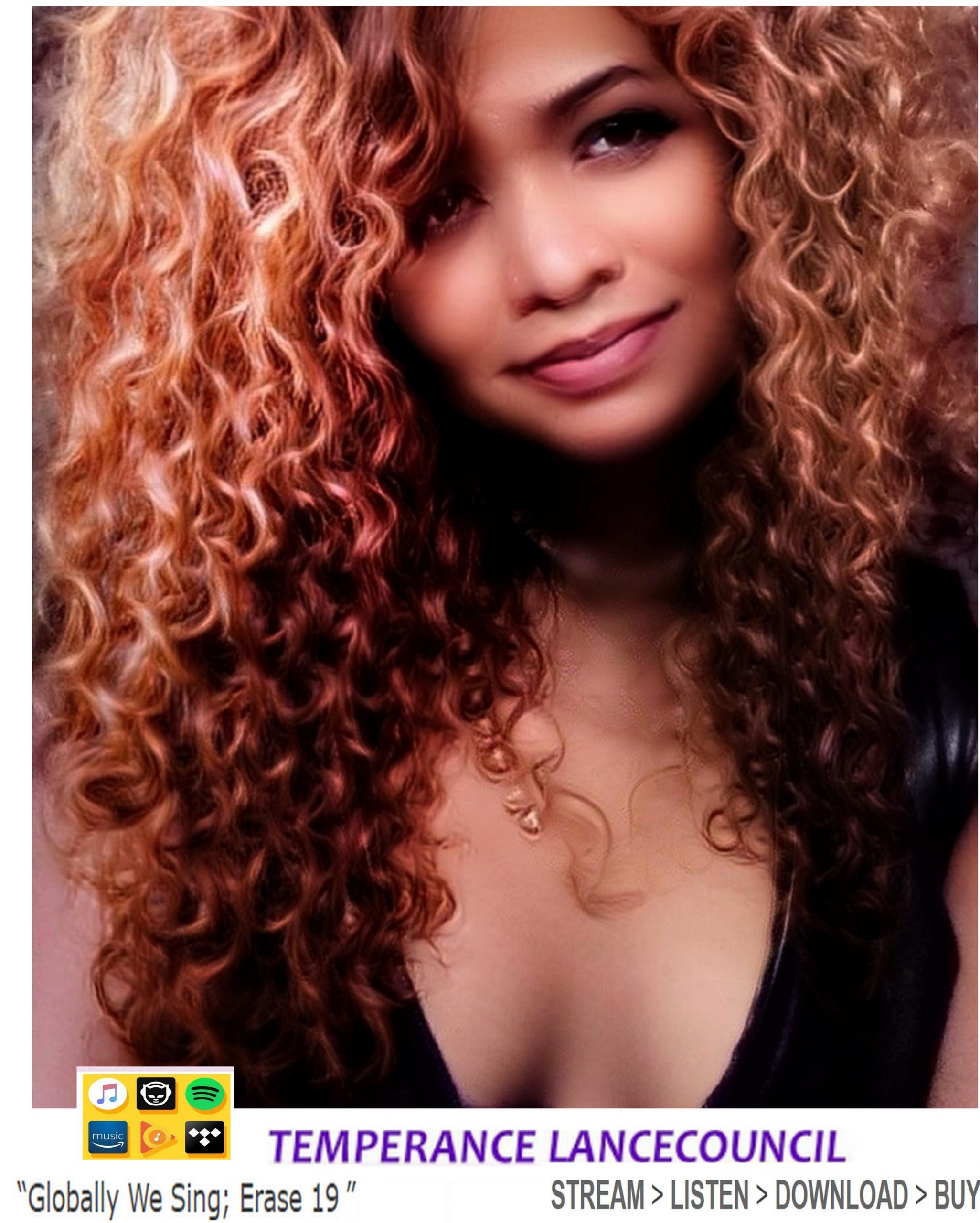 Temperance Lancecouncil is an American, country-soul singer and songwriter. What makes her country is that she grew up in a Southern, small-town, loving the music of artists like Dolly Parton and Glen Campbell; and couldn’t get enough of the show, “Hee Haw,” a country music, variety, TV show. What makes her soulful is her deep, raw, passionate-stirring, vocal style. She counts soul, singer James Brown, as the performer most inspirational to her to creativity. Her music is nitty-gritty, just like her real life has been, and her songs are all truth-inspired.

Few songs you’ll hear cover such immense emotional ground. “Globally We Sing; Erase 19” is the latest release from the talented singer/songwriter Temperance Lancecouncil and it finishes up as a gut-wrenching ballad the likes of which we really hear much of anymore.

There’s an obvious commercial edge to this material, insofar as it has enormous universality and a singer with across the board musical appeal capable of capturing causal and obsessive music fans alike. The production is simply stellar  and her command of the performance begins with its opening line. Temperance tosses herself headlong into the song’s passion play of heartbreak, longing, and regret and inhabits it with tremendous artistic confidence. Her careful attention to unfolding the song with great phrasing never inhibits her ability to deliver the emotional goods – “Globally We Sing; Erase 19” sounds like a song coming from a place of both regret and defiance.

The singer’s scars are plainly visible, but she sings as a way of staunching the bleeding and sounds resolute about moving on. It’s only the greatest of singers who are capable of embodying such deep human experiences with such regularity. The crowning touch of her achievement is the talent she shows for shaping her voice as closely as possible to the musical arrangement. Naturally, this never means mimicking the instrumental melody but, rather, positioning her voice again the music in a sympathetic way.

The lyrical content provides the script for Temperance’s art. It’s never overwritten; the words are carefully chosen and there’s no audible fat on the songwriting that trips up individual phrases. The lyric mines a near universal strand of language with turns of phrase any adult listener will recognize, but it never sounds unnecessarily contrived or stilted. Its pure conversational eloquence increases its chance for connecting with listeners and Temperance makes all of those moments count.

We decided to catch up Temperance Lancecouncil  for an exclusive interview with Camden Monthly..

What inspired you to get into music?
Per my mother, I began singing and dancing at age 3. By age 6, I was singing 3-part harmony, then began singing in the church choir and on to concert choir in high school. My maternal grandmother was a gospel singer, so it’s probably a “DNA” inspirational thing.

How would you describe your music?
Country-soul with no-frills, rough and nitty-gritty; just like my real life, which has been kind of rough. I really don’t want my music to sound perfect or “pretty,” because my life hasn’t been either. My music represents my turmoil, strife and struggle.

What would you say is your recording and song writing style?
Lyrics just pop into my head, probably because I’m always in some kind of metaphorical fight, with some of the tougher things that life has constantly thrown my way over the last twenty years. I release the pain or anger, or whatever it is, via my lyrics. I’ll just pick up a pen and it all gushes out, right along with the tears. I’ll then do a little editing in my head, while I’m driving around on back country roads.

Where would you like to see your music career in 5 years time?
In 5 years, I’d like to be in the Hall of Fame; truth be told.

Where can music fans listen to your music?
The music is available on every streaming and digital platform known to man, on planet Earth. SMILE!