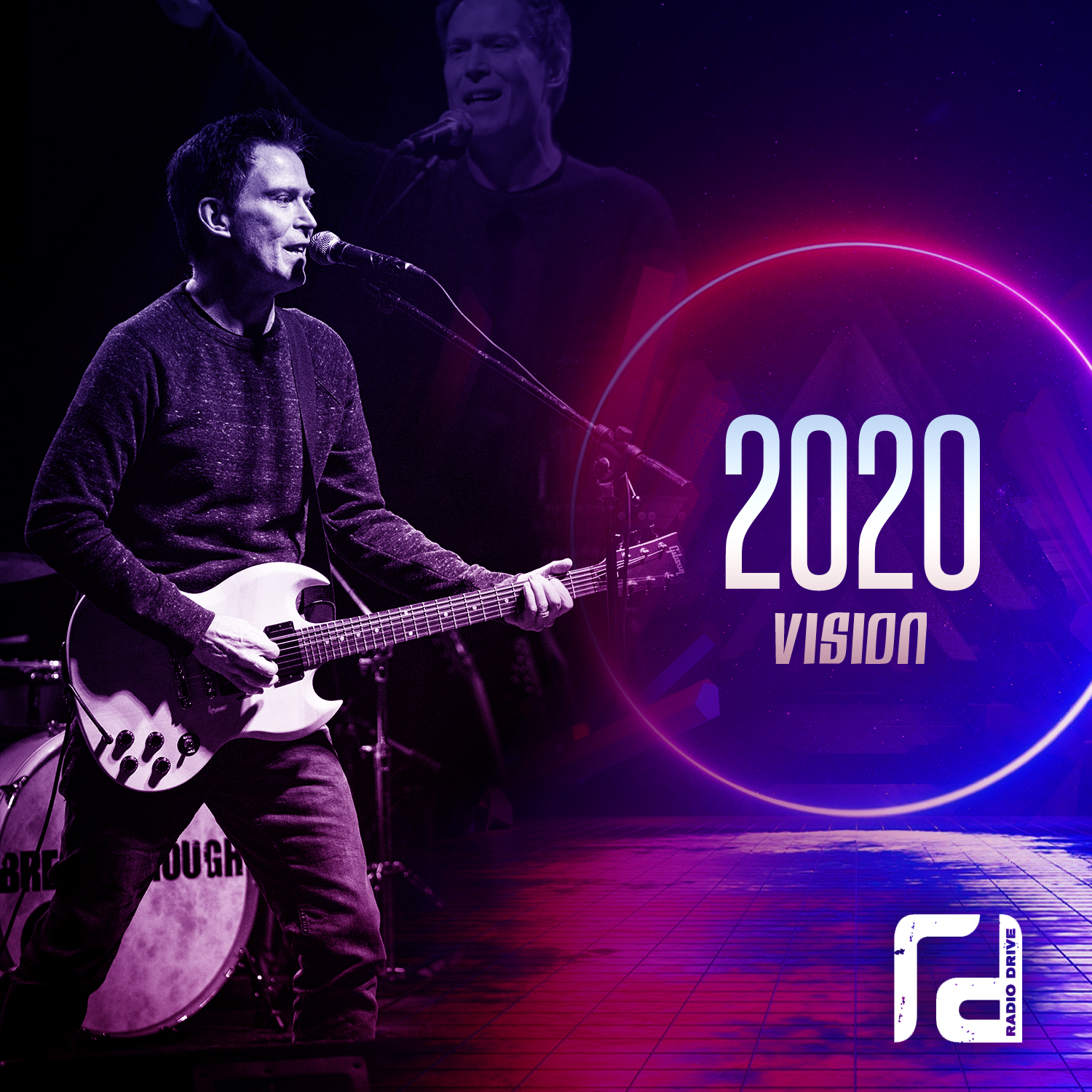 Introducing Radio Drive, an Alternative Pop Rock band featuring Kevin Gullickson who is the engine behind the band. Kevin has won several international awards and nominations for his songs and music videos. However, Radio Drive has taken the driving seat gaining coverage and fans worldwide partly due to the amazing new album 2020 Vision EP which is out now.

Kevin’s influences  play a major role in the first track on the EP ‘Borders’ . The track starts with a heavy guitar intro that  really spells out in all certain terms what to expect from the rest of the song.  The songwriting is on top form and you find yourself hooked from the first few seconds. By the time the chorus kicks in, you realise that you are listening to a masterpiece reminiscent  of the first time you  picked up an Oasis album. The song really captures the feeling of what it was like to undergo this part of history. Future generations to come will always look for material within research that documented what people went through and the song is a quick reminder that things were tough and people really went through nightmarish situations to come out on the other side. ‘Borders’ reminds us that we can always go above and beyond the confines of our mind and there is much more that can be achieved if we think outside the box. Just remember once you give permission to your mind to take you far away, it is more than evident that there has to be a triggering of imagination to reach higher heights. If you think you, can achieve but if you imagine and hold on to your imagination with both faith, action and conviction then the world will be your oyster.

His take on ‘Footsteps‘ flows seamlessly from ‘Borders’. His style is more melodic on the single with chimes and bell like sounds introducing the song leading to a much more eclectic  sounding arrangement. The songwriting, production and vocals  again on Footsteps is one that will seat perfectly on any radio dial. Listening to the song, you feel like the subject is a  man on a mission to get to someone. Maybe a partner, a loved one perhaps? Do you hear the sound of my footsteps and know that i still care? That’s the big question and the audience gave a resounding ‘yes’. Kevin knows how  to tell a story with his singing and songwriting in a way which makes you feel the sense of urgency.  Talking about urgency and footsteps leads quite nicely to ‘Moving on’  which is the third single on the EP  which even has something of an orchestrated quality, but it bubbles with a modern sheen thanks to its electronic music leanings. His determined to move on to somewhere? the big question is as he steps closer and closer, will there be a final destination in the move out of nowhere to somewhere?  Kevin is an amazing performer, guitarist and songwriter with substance who’s worth watching and hearing whenever you can.  By the time i get to ‘Sweet Thing’ i am already a big fan of this EP and it sort of makes sense where Kevin was rushing too. It must be love, oh yes it had to be love. With ‘Sweet Thing’ you find him combining the traditional sounds of rock music to deliver a more dramatic and general ear-catching song. The production style brings the song’s synths and guitar into total sympathy with the music and vocals threading its way powerfully through the track.

‘Humanity’ often has a rousing, intensely emotional sound and the musical peaks that come along the way are perfectly built up to and integrate the various elements at his disposal in a seamless, highly musical way.  “Sometimes a world is a lonely place, we are part of the same society, this thing we call humanity”. I paraphrase but the song ‘Humanity’ is completely spot on considering the world has been struggling with coming to terms with the subject of humanity and how we treat other humans who don’t particularly look like us. Kevin obviously arrived early at a vision for this song – it has an ideal running time and manages to pack a world of musical experiences into its relatively brief duration without ever sounding rushed or cluttered.  “We are all alike under one skin, one nation, one family. Open your eyes and see this thing you call Humanity” reminds me of what a Liverpool band Beatles will sing openly in the old days of good old pop music and as i was listening and  thinking of Beatles in came the chanting ‘All you need is love, all you need is love, and when you hear ‘Humanity’ you will certainly know that love is all you need. The harmonies, subject matter and execution is second to none.

His vocals are adept for facing down any challenge that comes along on the song Taste of Heaven . He really makes great drama out of the song’s lightly ironic twist and brings an appealing combination of grit and melody to play delivering the song’s lyrics. Much like the arrangement, Kevin’s lyrics never waste a word or any of the listener’s time and hit upon an accessible, conversational tone without ever dumbing down the adult subject matter.

The possible breadth of this EP’s appeal is immense. Listeners old and young alike will find some basis to relate to the songs or else understand the enormity of the experience. One does not write songs about buying groceries – these are works of art in miniature and aim to depict impactful events and feelings in our lives especially in the present era.“2020 Vision Ep” does that with relaxed, confident ease. There’s little doubt that Kevin has succeeded in putting together a masterpiece, a vision of art boxed into music. We managed to catch up with Kevin to find out a little bit about Radio Drive as we delve into the man behind the music..

What inspired you to get into music?
I was inspired to get into music at a very early age. I would hear the older neighbourhood kids playing the Beatles, Rolling Stones and The Monkees. I immediately fell in love with rock n roll music. When I was around 5-6 years old, I heard one my neighbourhood friend’s older brother playing the drums. I stood there mesmerised at the sounds he was creating. It resonated in my soul and right then and there I knew I wanted to be a musician. A few years later I started writing songs. Later in my teens I was putting together bands and playing at the local schools. After graduating, I moved to the larger city of Minneapolis, Minnesota and began playing the major clubs with my band. I’ve been making music pretty much all my life.

How would you describe your music?
It’s always been difficult for me to describe my music. I can tell you it’s a mix of my biggest influences: The Beatles, Led Zeppelin, U2 and Cold Play. It’s more positive and optimistic. It’s guitar driven, since my main instrument is guitar. Although, I love to have layers of string arrangements on top of a heavy beat with inspiring guitar riffs.

What would you say is your recording and song writing style?
A song usually starts in one of two ways: One way is when the idea or inspiration hits. It’s usually when I least expect it. I’ll do my best to capture the idea on my iPhone, then work on it later to put it all together.The second way is when I deliberately set aside time to write a song. I’ll squirrel away in my studio with either my guitar or at the piano and start playing. If I’m on the guitar, usually I’ll come up with a riff, then start putting chords around that. Sometimes the lyrics come at the same time with the music. Although, recently, more often than not, I write out and record a rough idea of the entire song, then I’ll put lyrics to that. I’ll listen to the music over and over and see what comes in the way of lyrics. My lyric writing comes in the same two ways. Sometimes I get the inspiration and write it out as fast as it comes. Other times I have to sit down and deliberately put it together. I’m thankful to have a home studio where I can put this all together. I’m pleased to say I am able to play all the instruments on my recordings. So I’ll lay down a reference track and start adding from there: Guitars, bass guitar, key boards, and all the vocal parts. For the last few albums, I’ve connected with an amazing session drumming in Italy to play the drums. He’ll record his parts and send them to me. Then I’ll take all the tracks and send to a studio in Texas, that I’ve been working with and they’ll do the mix and mastering.

Where would you like to see your music career in 5 years time?
I’m pleased to say I’ve been very successful as an indie artist. I feel it’s time to grow and expand to a larger audience. I have a few things in the works, which I believe will take me there. That is where I would like to see myself in five years.

Where can music fans listen your music?
My music is available at iTunes, Amazon and most online stores. You can hear it on Spotify and most streaming platforms. Plus, visit my Youtube channel to see several music videos produced over the years @RadioDriveMusic